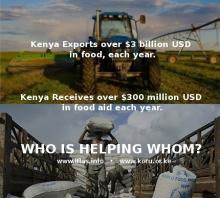 Amazing as it may sound Kenya exports over 3 billion dollars worth of food!

The World Food Program says that Kenya has a yearly need of $300 million USD to pay for food aid, while exporters brag that Kenya exported roughly $3 billion USD in food products in 2010.

For every one dollar in food-aid Kenya receives, it exports ten dollars of food! How can this be?

Whatever way you want to classify it, Kenya is exporting a lot. In a fair and just world the country should be wealthy and just one starving child should be headline news. Instead Kenya is a country where millions barley survive on less than a dollar a day.

Let this sink in. These numbers boggle the mind .

Simply put, the companies that are exporting the food, flowers and coffee are mostly foreign owned. The vast majority of the $3 billion dollars does not stay in Kenya. Kenyan minimum wage is about $2 dollars per day. This is not enough money to put children through school and improve your family home. While many Kenyans are employed by these companies, few find the ability to move ahead in life. With poor working conditions and little benefits many Kenyans are simply trapped in these jobs and are unable to save money.

Is Kenya becoming more and more of a Banana Republic and following the poor example of countries like Guatemala ?

How does the Kenyan political class allow this? Ministers of Agriculture in Kenya have a long history of making deals that favor large corporations and not common Kenyans. Is this unfettered capitalism? Can a corporation buy up as much land as they want in Kenya, give Kenyans a meager wage and pay off the correct politicians, and walk away with millions in profit?

If NGO's and world-wide aid organizations see the amount of food being exported from Kenya, why are they still sending aid?

Alan Coyne an international aid worker and human rights activist gives aid organizations the benefit of the doubt by stating, "corruption in Kenya is so ingrained that aid organizations like UNFP can do nothing against it. So they simply give food. Not only is the problem corruption but political power and land ownership has been handed down from generation to generation." Indeed, the richest man in Kenya is Uhuru Kenyata, the son of the first president and owner of at least 500,000 acres. (Currently running for president while also facing charges at the ICC).

Price Waterhouse found Kenya to be the most financially corrupt country in the world; yes, above Nigeria and Mexico. Transparency International lists Kenya among the worst countries for corruption. UN reports also list Kenya as having the biggest inequalities in Africa.

Regardless of how we got here, current solutions, like food aid, are not solving the problem.

So what are some solutions?

Lets put a stop to all this nonsense that is causing more and more people to suffer!